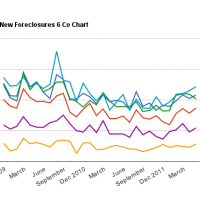 The top 20 Chicagoland area cities with the most homes in foreclosure for the first quarter of 2012 were calculated using the ILFLS.com database. Among these cities are Chicago, Aurora, Elgin, Joliet, Plainfield, Cicero, Waukegan, Bolingbrook, Berwyn, Calumet City, Naperville, Romeoville, Des Plaines, Schaumburg, Carpentersville, Palatine, Streamwood, Hanover Park, Dolton, and McHenry. October 2006 is when home prices peaked – this March 2012 local home prices were down 39% compared to the peak. Because of this, many homeowners are being pushed underwater. What does this mean? The mortgage holder owes more on the mortgage than their home is actually worth at this point.

Aurora ranks number 2 on the top 20 foreclosures list, second to Chicago itself. The number of home foreclosures in Aurora reached 449 for 2012 thus far. Over 17% of homeowners are both behind on mortgage payments and underwater in Aurora. Because of this, it is understandable that some of the owners have chosen to stop making payments.

In the Chicago area overall, home values have fallen nearly 39% since Fall of 2006. A high rate of delinquency can pin point several factors about a location. This indicates that, unfortunately, prices will probably remain low in those areas for a few years despite other whether or not other areas’ values increase. For potential homeowners and bargain hunters, it implies that new foreclosures will be steadily coming on the market at low prices. Investor confidence is increasing. The new filings have increased slightly, but nothing unusual. Foreclosure activity is stable as far as the rate is concerned for this area for this time of year.