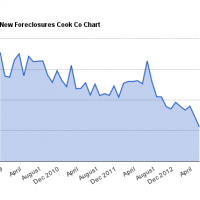 The road to real estate recovery may have a few bumps in Illinois but like the rest of the country, overall statistics show the state is over the foreclosure hump. "Chicagoland is following the national trend of fewer foreclosures which is a good indication that the real estate market is turning around," observes ILFLS.com Managing Director Peter Georgiev.

Although Illinois has one of the nation's highest foreclosure rates (after Florida and Nevada), even its statistics are promising with first-quarter foreclosure activity falling 2% from the previous quarter and showing a 4.5% drop from a year earlier.

“The decrease in the number of REOs versus total sales is a good sign for the renewed interest in people buying foreclosed properties at auction,” adds Georgiev. This news, combined with fewer foreclosures, suggests the worst of the real estate crisis is over for the nation—which includes Illinois!