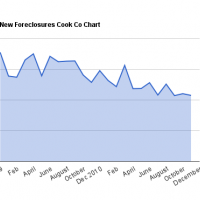 New foreclosures filed in the Chicago area during November rose slightly compared with a month earlier, according to figures compiled by the Illinois Foreclosure Listing Service (ILFLS). New foreclosure filings in the seven-county area tracked by ILFLS totaled 5,329 in November, compared with 5,316 in October and 6,026 in November 2010. Completed foreclosures — those selling at auction or reverting back to lenders — increased to 2,694 in November from 1,778 in October and 1,359 in November 2010, a huge 98.23 percent increase. There was also a substantial increase of 50.47 percent in the number of properties sold to investors in November compared to last month activity, and a 235.42 percent increase compared to 2010 year.

"As usual the majority of the activity was due to the REO properties — well over 94 percent of the completed foreclosures. On the other hand we saw a huge increase in the investor activity this month. This is a good indicator of the increased investor confidence. Hopefully this trend will continue," said Peter George, ILFLS CEO and Database Manager.

“As expected, the number of new filings at the end of the year has increased in most of the Chicagoland area counties. In Cook County there was a small decline of 2.48 percent compared to October. The highest drop in new filings was in McHenry County - 17.81 percent decrease. “ - ILFLS chief database manager said. “We expect 2012 to be a very good year for the real estate investors.”