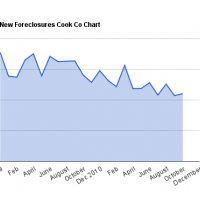 New foreclosures filed in the Chicago area during October rose slightly compared with a month earlier but fell by nearly one third from a year ago. New foreclosure filings in the seven-county area tracked by ILFLS totaled 5,316 in October, compared with 5,161 in September and 7,989 in October 2010. Completed foreclosures — those selling at auction or reverting back to lenders — increased to 1,778 in October from 1,762 in September and 1,63 in October 2010. But the number reverting back to lenders after they did not sell at auction (Real Estate Owned, or REO) continued to represent the overwhelming majority of completed foreclosures.

This glut of REO properties, well over 90 percent of the completed foreclosures, means these properties remain on the market and will continue to adversely affect housing prices. There was slight improvement in the number of units sold at auction year-over-year, but the numbers are so small as to be almost inconsequential.

As expected, the number of new filings seems to be picking up compared with recent months now that the 'Robo-signing' controversy is ebbing. This trend is expected to continue over the next few months.