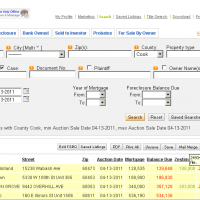 The past week has been a big one for foreclosures in Cook and the surrounding counties.  With 48 foreclosed properties sold to investors, Cook County’s residents are less frightened and more apt to buy than they were just 6 months ago.  Plus, the amount of foreclosures in Cook County has decreased in general.  From June 2012 to June 2013, the number of new foreclosures has dropped by 55.65 percent.

Most of the surrounding counties are also seeing an increase of properties bought by investors.  DuPage County had 8 properties snatched up last week, and Lake County has 11 new owners, as well.  Some counties haven’t been as lucky, though.  Kendall County had a rough week, selling only 3 properties.

Despite Kendall County’s low numbers, Cook and its surrounding counties performed well this week. As always, the auctions provide us with interesting stories.  This week, one property in Waukegan sold for a surprisingly low price.  The estimated worth from Zillow was $75,983, but the bidding started at $43,394, with the home eventually selling for $44,395 -- almost half of that.

So what gives?  Well, when it comes to foreclosed properties it’s best to do your homework.  In some cases, the home has been vacant for months or years or the owner’s hardships have led to unresolved issues with the property.  Sometimes, though, the buyer just gets lucky because the bank is impatient and wants to recoup their money quickly, even if the price is less than they initially wanted.  In the case of the Waukegan home, the low selling price may be attributed to the predicted drop in property value for the area in the next 30 days.