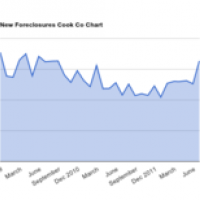 According to stats compiled by ILFLS.com, the Illinois Foreclosure Listing Service, Chicagoland foreclosures appear to be on the rise with an 11.37% increase in total foreclosures. The increases, however, were only seen in Cook County. Decreasing numbers were compiled ranging from 3.96 to a 20% decrease in foreclosure filings for July 2012 in the following six counties: Will, Kane, Lake, McHenry, Kendall, and DuPage. According to the data, property foreclosures have increased overall in the Chicagoland area compared to the previous month, June 2012, and compared to last year, July 2011.

In July, only one of the seven Chicagoland counties showed an increase in foreclosure activity compared to June 2012. The total number of home foreclosure filings for the seven counties for June 2012 was 6,720. This is moderately lower than the total for July which reached 7,484. This is an overall increase of a little over 11.37% compared to last month. Although the filings went up as a whole, six of seven counties saw significant decreases in foreclosures. The largest decreases from June to July were seen in the counties of Lake, McHenry, and Will counties. The largest decrease was seen in Will County going from 674 foreclosure filings in June and decreasing over 20% to 546 in July. McHenry County also decreased significantly, 15.48%%, going from 336 in June to 284 in July. In Lake County, foreclosure filings fell from 622 in June to 550 in July, accounting for over an 11% decrease in filings.

With such an alarming number of foreclosures in Cook County, nearly 5,000 for the month of July, eminent domain has been proposed to vacate the premises. Mayor of Chicago Rahm Emanuel, however, opposes this idea. Under eminent domain, the city would use their condemnation powers to purchase an underwater home's mortgage at a discounted price and refinance at a lower rate to lower the monthly payments. The goal of doing so is aimed at keeping Chicago residents in their homes and to protect the value of not only the property itself as well as nearby neighborhood homes whose value could possibly be negatively affected by nearby foreclosures. This process is actually to help homeowners who are current on their mortgage payments and wish to refinance.