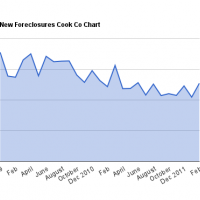 Could this trend provide hope for Illinois residents? Some experts assert that the numbers are "artificially low" and express that foreclosures will, once again, begin to rise over the next year. Since February 2011, the number of homes going into foreclosure has fallen 8% since February 2011 nation-wide. Over 25% of states, however, have reported yearly increases in the number of home foreclosures. Chicago alone has the second highest foreclosure rate in the nation. The state of Illinois as a whole has the eighth higest rate of foreclosed homes. Over 103,000 homes were foreclosed in Illinois in 2011 - over 97,000 were in Chicago alone. Due to this alarming foreclosure rate in the Chicago area, state and local officials have designed varius programs to advocate for these homeowners.

It can be difficult for the average resident to comprehend the various federal and state resources offering assistance and guidance for people attempting to get their homes out of foreclosure. Because of this difficulty, Mary Kenney, Director of the Illinois Housing Development Authority, organized six regional workshops named "Keep Your home, Illinois" to assist everyday residents on how to get out of foreclosure. The services provided by local counseling agencies and numerous other organizations are free and allow homeowners to weigh their options regarding their homes and their current state of foreclosure. Legal assistance, debt management, and even help job searching is also provided. Over 800 at-risk homeowners attended the most recent workshop in Berwyn on March 21, 2012. According to the Center for Housing Policy, nearly half of homeowners who utilize foreclosure prevention services are able to keep their homes.