After President Joe Biden and Democrats in Congress worked feverishly but failed to agree on a long-term solution to protect millions of Americans from being evicted during a COVID-19 influx, the nationwide eviction moratorium was slated to expire Saturday, July the 31st.

However, the judges approved the challengers' request to expand the suspension date of the moratorium imposed by the US Centers for Disease Control and Prevention (CDC) that was set to expire at the end of July until October 3rd.

As stated by the court, “It strains credulity to believe that this statute grants the CDC the sweeping authority that it asserts,” adding that “If a federally imposed eviction moratorium is to continue, Congress must specifically authorize it."

The expansion of the 2020 moratorium on foreclosures

In June, the top court indicated that the moratorium on foreclosures was sitting on a fragile legal foundation and that such a policy should be adopted by Congress rather than imposed unilaterally by the executive branch. So, consequently, after a previous moratorium approved by Congress expired in September 2020, the CDC imposed a new one in September 2020, claiming that it was necessary to combat the spread of COVID-19 and prevent homelessness during the pandemic.

Biden's administration established a slightly narrower eviction moratorium on Aug the 3rd, three days after the previous one expired, under political pressure from his fellow Democrats.

What happens after the end of Illinois moratorium on foreclosures on October 3rd?

The extended Illinois moratorium on foreclosures officially ended on Sunday, October the 3rd and, as expected, thousands of renters could face eviction or foreclosure in the near future, with of them taking on multiply jobs just to make ends mean.

The moratorium stopped landlords from evicting tenants who couldn't pay their rent because of COVID-19's financial consequences. It did not, however, forgive the missed rent payments, hence tenants who hadn’t paid their rent in the last year and a half could have faced eviction notices from their landlords.

In the light of the most recent events, Cook County Board President Toni Preckwinkle announced the third round of help assistance programs, adding $75M for suburban residents who meet some specific criteria. Close to $443 million in emergency rental assistance has been offered to 49,100 households with the help of the Illinois Rental Payment Program, Gov. J.B. Pritzker's office notes on Abc7. The aforementioned program was launched in May 2021, instructing that payments were made directly to landlords only if the landlord did not pursue eviction.

In the meantime, several property owners say that going to court is their only option today as they are facing tens of thousands of dollars in back rent while also having difficulties accessing rental assistance funds through the state.

The below chart portrays the total number of residential eviction filings in four of Illinois' largest counties for the months of August and September, up to Oct. 4, 2021. 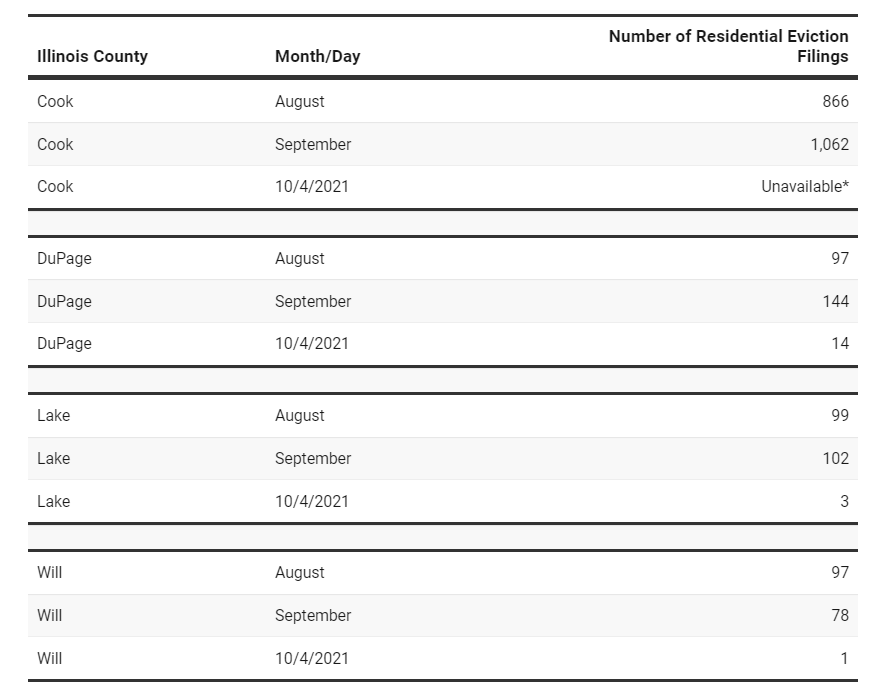