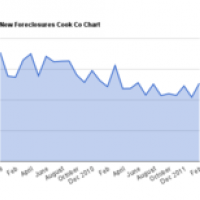 The foreclosure situation in the Chicagoland area continues to be shaky. While January marked a noticeable improvement over December, the latest Chicago foreclosure statistics show that things didn't fare so well in February. According to information that has been published by the Illinois Foreclosure Listing Service at ILFLS.com, the total number of foreclosures in Kane, DuPage, Kendall, Lake, McHenry and Will counties was higher in February than it was in January. As a result, the downward trend that appeared between December and January seems to have been stopped in its tracks. For more in-depth information about the latest statistics, check out the following information.

Before delving into specific information about each county, it's smart to consider the big picture. In the seven counties for which statistics have been published, the total number of Chicago foreclosures increased between January and February. In January, the total number of foreclosures across all seven counties was 5,138. In February, the total stood at 6,168. That represents an increase of approximately 20 percent, which indicates that the real estate market in the Chicagoland area is not quite on the rebound at this point.

As is generally the case, certain counties experienced larger spikes in foreclosure auctions than others. As a result, the total number of Chicago bank owned properties may be higher in some counties than it is in others. For specific information and foreclosure statistics for each county, take a look at the information below: