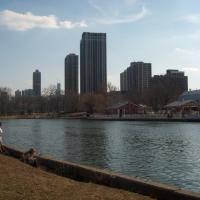 According to the Illinois Association of Realtors Illinois home sales in March were up 25% over February, but the March 2008 numbers are down 29.5% compared to March of 2007.  The Chicago real estate market fairs better than Illinois as a whole with only a 11.5% drop in home sales in March over the same time last year.