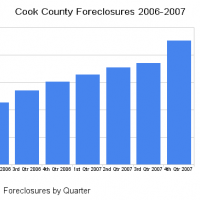 ilFLS.com, the Illinois foreclosure listings service, released its final foreclosure numbers for 2007 yielding some interesting, and for homeowners, some worrisome growth trends in the Chicagoland foreclosure market.

It is difficult at this point to determine whether Illinois foreclosures reached an absolute peak in 2007, however one thing is very certain:  compared to 2006, Cook and the collar counties saw a dramatic increase in the number of homeowners facing foreclosure.  In fact the 4th Quarter of 2007 saw a 43% increase over the same period the previous year.

"The statistics in Illinois are representative of an expanding foreclosure market." says T.J. McKinney Investor Relations for ilFLS.com. "Basically you have a perfect storm that is creating the foreclosure market:  the bursting of the real estate market bubble resulting in a decline in real property values, the U.S. economy entering a recession, and the lack of ready available capital to remedy the situation.  Put simply we expect an additional 10-15% increase in the number of foreclosures in the Chicagoland area in 2008."