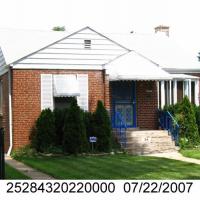 After Chicagoland auction sales skyrocketed during the first full week of January, the hype is starting to die down.  135 properties sold at auction from Jan. 5th-9th this year, so it is no surprise that from Jan. 12th-16th, the numbers were a bit tamer.  In fact, the 87 properties sold to investors last week is still quite high when we look at average weekly sales during winter.  Clearly, Chicago investors have been taking advantage of the first few weeks of the New Year to accomplish a few resolutions?

One such investor snapped up a property located on Brayton St. in Chicago for 85% less than the Zillow estimated price.  Instead of paying the $95,392 estimated price, they were able to get this 1,099 sq. ft. home for only $14,500.  Another cool thing about this specific sale was that the starting bid was $14,400, so it’s possible that the winning bid was also the first or only bid!  This single family home was built in 1948 and came with a detached garage.

This property has been in the foreclosure process since 2010.  The initial mortgage was made in 2008 with a 30 year commitment, but the last payment was made in March of 2010.  After that, the home fell into foreclosure and had a balance due of $174,803.  With that being said, it is even luckier that the investor got the home for only $14,500!

With properties that have been vacant for more than a few months, there is always the possibility of damage to the home, etc.  We recommend doing a quick drive-by for yourself before the auction date in order to ensure that you aren’t getting a money pit on accident!  However, in the case of the Brayton St. home the new investor was able to save a lot on the home price by buying it at auction and may be able to take on any repairs themselves, making it a good investment in the end.