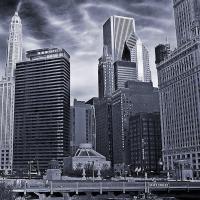 Across the United States the economy has taken a heavy toll on consumers in the way of record unemployment and home foreclosures. The rate of Americans losing their jobs doesn't seem to be leveling off as of yet, so it is anticipated the market will continue to be flooded with homes up on the auction block. One of which has been hit particularly hard is Chicago Metro Area in Illinois.

As released from the Illinois Foreclosure Listing Service, through the third quarter of 2009 alone, there were a little over 53000 legal actions filed to begin foreclosure proceedings in Chicago land. Parts of Chicago Metro, which includes the metropolitan area, were hit with an increase of a whopping forty percent. Biggest in increase in numbers of new foreclosure fillings were Kendall, McHenry and Dupage Counties. In Cook County alone, there is a back up of files waiting to be recorded in the coming years. These are some of the worst numbers for consumer home loss in the nation. Illinois currently ranks fifth in the nation in the number of home foreclosures.

The catalyst which brought on the avalanche of Chicago foreclosures is the unemployment rate, and not just a hefty number of high risk loans. Although there would undoubtedly be a few bad loans made in each area, the unemployment has been identified as the primary cause, as unemployment in Illinois has risen to 10.5%, according to the U.S. Bureau of Labor Statistics. As of August 2009, when these numbers were released, the U.S. national average for unemployment was 9.7%.

Home foreclosures got to be such a huge problem for the entire state of Illinois that the governor of the state, Pat Quinn, signed a bill which gave homeowners more rights which can help stop some of the legal proceedings. The law was signed in April of 2009 and gives homeowners who agree to have homeowner counseling an extra 90 days to get their affairs in order and keep their home. This law will help those who have not yet entered into the legal action of having their home foreclosed. All mortgage lenders in the state must abide by the terms set forth in the bill, which is set to expire after two years.

Individuals who are interested in taking advantage of the many properties available because of the trend in foreclosures have plenty of homes to choose from. Lenders are of course more stringent on applicants being able to meet stricter guidelines and incomes before approving loans. The majority of loans can only be approved up to 75% of the home's value, with the buyers having to cover the remaining 25% on their own. These are usually handled through a down payment of cash from earnings or a separate loan.
Chicago has been hit hard by the economic downturn, with unemployment and foreclosures touching the lives of many. Thankfully some homeowners will be able to keep their home due to the Homeowner Protection Act, and the likelihood of jobs returning when the economy turns around. In the mean time, there are plenty of home deals for those who are in the position to take advantage of them.