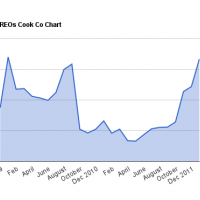 Recent reports released by the Illinois Foreclosure Listing Service, ILFLS.com, show that Chicagoland foreclosure activity rose sharply during the last two months of 2011. This increase in the number of completed foreclosures contrasts with figures from the rest of the year, which had fewer new foreclosures than the same time period in 2010. The second quarter of 2011 had the lowest number of foreclosed homes since 2008. The number of foreclosures in the Chicago area during the month of July declined by 46 percent compared to the previous year. This significant decrease lowered the total number of properties in Illinois that were in foreclosure.