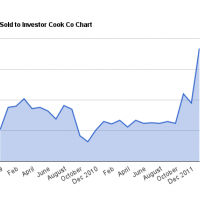 According to latest numbers released by The Illinois Foreclosure Listing Service, ILFLS.com,the Chicagoland residential real estate picture improved in the first month of 2012. Across the seven county region, foreclosures posted a significant decline of 16.26 percent. At the same time, buyers snapped up Chicago area foreclosure auctioned properties at a 67.22 percent higher rate than in the past.

Sales of Illinois foreclosure properties through foreclosure auctions significantly increased in January both on a month-over-month and year-over-year basis. In fact, sales of Cook County foreclosure properties through the auction process increased by 64 percent compared to the previous month and with 183 percent compared to a year ago. Suburban counties also posted a meaningful overall increase. Although properties sold to investors in Will County has dropped by 27 percent and Kendall County's were flat, every other county grew, with McHenry County more than tripling the number of properties it sold at auction, going from 3 to 11. Although less statistically impressive, Kane County went from 13 to 16 sales and Lake County increased from 20 to 27 sales. Dupage County came close to Cook County's 94 percent increase, posting an 83 percent increase on 44 auction sales. This represents a 67.22 percent region-wide increase.

Unfortunately, lenders are also taking back more properties. With the exception of Kane County where lenders took back the same 197 properties that they did in December, every other county increased. Kendall County lenders added 70 more properties into their "Real Estate Owned" (REO) inventory, McHenry's lenders took 157 properties back and Kane County lenders increased their REO holdings by 191 properties. More significantly, Will County generated 249 more REO reversions, DuPage County accounted for 250 and Lake County put 338 properties on the books of the lenders. Chicago bank owned properties grew by 600 more units in January than in December for a Cook County-wide total of 2532. Overall, REO inventories across Chicagoland grew by 32.04 percent.

While REO inventories continue to grow there are indicators of broader health in the market. Foreclosures continue to drop both over the previous month and over the same month last year. Sales at foreclosure auctions are increasing, indicating that buyers and investors are gradually absorbing the oversupply of distressed properties. While the Chicagoland market is far from being back to normal, it is nevertheless well on its way.