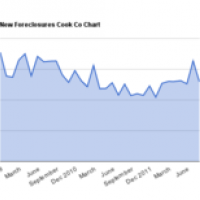 According to stats compiled by ILFLS.com, the Illinois Foreclosure Listing Service, there has been a decreasing trend Chicago land foreclosures with a 14.60% decrease in total foreclosures from July to August. Decreasing numbers were compiled ranging from -4.58 to a -20.67% decrease in foreclosure filings for August 2012 in the following five counties: Cook, Kane, McHenry, Kendall, and DuPage. According to the data, property foreclosures have decreased overall in the Chicago area compared to the previous month, July 2012. There is an increase, however, compared to last year, August 2011.
In August, only two of the seven Chicago land counties showed an increase in foreclosure activity compared to July 2012. The total number of home foreclosure filings for the seven counties for July 2012 was 7,486. The total for August, however, was only 6,393. This is an overall decrease of a little over -14% compared to last month. The largest decreases from July to August were seen in Cook, Kane, and Kendall counties. The largest decrease was seen in Cook county going from 4,911 foreclosure filings in July and decreasing over -20% to 3,896 in August. Kane County also decreased significantly, -18.31%, going from 486 in July to 397 in August. In Kendall County, foreclosure filings fell from 155 in July to 136 in August accounting for over an -12% decrease in filings.
The two counties with increases in the number of foreclosures filed from July to August were in Lake county and Will county. Will county had an increase going from 506 foreclosures in July and increased over 13% to 697 filings in August. There was also a slight increase in Lake county had the second from 485 foreclosures in July and jumped to 576 nearly a 5% increase. Furthermore, foreclosure filings for August 2012 have actually increased from last year when in August 2011 foreclosure filings were at only 6,139. Comparing August 2011 to August 2012, there was a slight increase of 4.13% in foreclosure activity in August of this year with 6,393 total foreclosures.
Despite the Chicago land overall decrease from July to August, Illinois has ranked the nations highest number of foreclosures in any state. It has been calculated that, in Chicago land, foreclosed homes bring down the value of neighboring houses an average of $7,000. Over the past year, banks have been increasingly held accountable for vacant homes due to foreclosures in the Chicago area. With this, the city is allowed to issue fines to the banks if properties are not kept up properly including the following: boarding up entrances, responding to complaints pertaining to the property, landscape upkeep, and keeping the proper areas free of snow during the winter months.