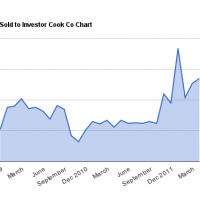 There is an increasing competition on the housing market. For 2012, month after month foreclosures have been steadily rising each month throughout the six counties of Cook, Will, Kane, Lake, McHenry, and DuPage. The stats compiled by Illinois Foreclosure Listing Service for April 2012, however, show that this steady increase has come to an end. In April, all of the seven Chicago land counties showed a decline in foreclosure activity. The total number of home foreclosure filings for the seven counties for March was 6,411. This is slightly higher than the total for April which reached only 6,279. This is an overall decrease of about 2%. This total is an increase from last year, however, when in April 2011 foreclosure filings were at only 5,641. Comparing April 2011 to April 2012, there was a 22.06% increase in foreclosure activity during that particular month.

Still, many substantial opportunities for investors and home buyers exist throughout Illinois. Home prices are continuing to fall. There is a large market for distressed properties. Local and out-of-town investors are in competition to purchase homes for rehab, resale or to convert them into rental properties. Rental properties are, potentially, a solid investment. The residential real estate market has been declining for the past several years in spite of record-low mortgage rates and various government incentives. A new found interest by investors could signal that the market is at, or near, its bottom.

For the time being, the rush of investors searching for real estate steals will go on weighing down the prices of residential homes. The number of foreclosed homes sold to investors is significantly higher in April 2012 than it previously was in April 2011. In April 2011, 104 homes throughout the seven Chicagoland counties were sold to investors. In April 2012, however, this number more than doubled reaching 222. Sooner or later, as the quantity of vacant foreclosed properties lessens, home prices will become stabilized and eventually begin rising once again.

In judicial states, like Illinois, foreclosures generally take longer to process because they must go through court routines. In April 2011, a committee was formed by the the Illinois Supreme Court with the intent to examine Illinois' mortgage foreclosure process and to analyze how various procedures and rules affect the proceedings statewide. The committee also interpreted how other states have handled high volumes of unprecedented numbers of foreclosure filings.

After about a year of examination, the committee made several recommendations to the Illinois Supreme Court. There were a variety of suggested paperwork changes. Giving homeowners more notice about their rights was deemed of high importance. One key recommendation was that the Illinois Supreme Court requires that foreclosure sales be held within 45 days of the expiration of the redemption period, the date by which a homeowner can make the mortgage current and keep the property.