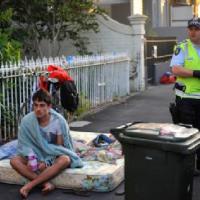 As foreclosures are obviously on the rise, Illinois ranks the fifth highest state of foreclosure in the nation. With more than 30,000 foreclosed homes now since the beginning of this year, and almost the same number waiting to be filed in the Chicago metropolitan area alone, the number of foreclosed homes is only growing by the hundreds week after week. Where do all of these people relocate to? Some people are left to rent whatever they can find. But, what if they don’t have the first and last month’s rent deposits? Some of these people choose to live in hotels with cheap weekly rates. And, unfortunately, some of these people are left homeless.

Often overlooked, what happens to renters whose homes are foreclosed because their landlord did not pay the mortgage? Although they have paid their rent as per their agreements, they are losing thousands of dollars from unreturned deposits and unexpected evictions and thrown on to the streets. This became such a large issue in Cook County during Fall 2008 that one sheriff, Thomas Dart, refused to evict these people and instructed other deputies to do the same. Illinois law states that renters must be notified 120 days in advance of being evicted that their home is being foreclosed upon. Unfortunately for many tenants, this law is often overlooked. For 2009, 4500 said evictions are expected to take place in Cook County alone. Of over the one million homes in foreclosure in the United States, about 1/3rd of these homes are occupied by non-owners; this translates to over 300,000 people.

Amendments to bank contracts have been made to include a clause stating that banks must prove that they have informed all tenants of the grace period before they are evicted. In August the law was passed  in Illinois requiring 90 days notice. It is likely that further protection will be added on a state by state basis to ensure that tenants are not being treated unjustly. What else can be done? Some can sue their previous landlords for the sum of their unreturned deposits. Unfortunately, however, many landlords in these crises are bankrupt and there is no money to collect. Furthermore, President Obama passed the “Protecting Tenants at Foreclosure Act of 2009” on May 20, 2009,  that stated that those involved in a lease will not be forced out of their homes and that the lease will remain sound when a new landlord takes over.

Now, more than ever in recent years, renters are in dire need of stable rentable units and dependable landlords. Here is what this information means for possible investors in 2009 and upcoming years:

Make the housing crisis a way for you to earn supplemental income and for families everywhere to obtain the stability and comfort they desperately need during this economic folly.

ILFLS.com is the Chicago based, premium source for foreclosures, auctions, REOs and marketing lists specifically built for the investor by local real estate investors.