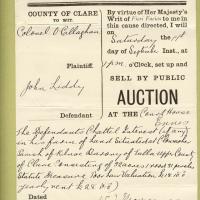 A survey released recently by business schools at the University of Chicago and Northwestern University found that 34 percent of foreclosures nationally were the result of "strategic" defaults by homeowners seeking to get out from "underwater" mortgages.

Many of them simply walked away from homes and mortgages that were valued much higher than the homes themselves as a result of the nationwide housing crisis. Some strategic defaulters have returned to the housing market to buy new homes at payments similar to their original mortgages, the survey found.

Recovering from strategic defaults, however, takes time — as much as three or more years — and a good credit rating following the foreclosure. But with a credit score in the 600s, foreclosed homeowners probably will eventually qualify for a Federal Housing Authority insured loan.

The amended version holds banks responsible for maintaining vacant properties within 60 days of a mortgage default. Maintenance would include mowing grass, shoveling snow and boarding up the buildings.

The original measure, passed in July, would have considered banks to be owners of vacant property even before they went into foreclosure. The ordinance had required more than routine maintenance.

Enforcement of the July ordinance, however, has been put on hold for fear that it would not withstand a legal challenge. Among the concerns were that the ordinance would conflict with the Illinois Foreclosure Act, which prohibits treating banks as legal owners of a vacant property before they actually take possession. Additionally, some opponents suggested the ordinance violated property law, which requires title to a property in order to have access to it. The original ordinance was scheduled to go into effect Sept. 18.

City officials said some major banks have signed off on the revised proposal and have agreed to work with the city to help develop state legislation that would streamline the foreclosure process.

Chicago police arrested 130 demonstrators in Grant Park Sunday when they refused to abandon their anti-Wall Street protest. Leaders vowed to continue the protests, an outgrowth of the 'Occupy Wall Street' protests against, among other issues, the high rate of foreclosures initiated by major banks.

The only other arrests reported in the nation Sunday included 11 in Cincinnati. The Chicago arrests, which began about 1 a.m., were based on violation of the park's 11 p.m. closing time. About 175 arrests were reported in the park the previous Sunday.

Police estimate about 1,500 began the protest Saturday in the city's financial district, then marched to the park. Among their chants were "Banks got bailed out, we got sold out!"

A few young people started the Occupy Wall Street movement a month ago in New York, and it has since grown to include tens of thousands of protesters nationally and around the world.

President Barack Obama is expected to announce new initiatives designed to help homeowners avoid foreclosure on their properties. With his $447 billion jobs program effectively blocked by Congress, the president's latest measure will not require approval from lawmakers.