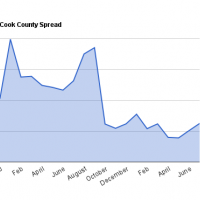 Although sales of Chicago-area homes in some stage of foreclosure during the second quarter decreased from a year earlier, they represented a significant increase in the percentage of all home transactions. Additionally, distressed properties were selling at a steep discount of an average of close to 51 percent compared with conventional market prices.

A total of 8,653 distressed homes were sold in the seven-county area during the three months ended June 30, 2011, a 7.7 percent decrease from the year-earlier period. This accounted for about 38 percent of all home transactions, up from 29 percent the prior year. The average sales price was $135,688. Property sales last year were boosted in part by homebuyer tax credits

Foreclosure Sales Up From Beginning Of 2011

Bank foreclosure home sales were up, however, by 6.6 percent during the second quarter of this year compared with the first quarter. The increase may be tied in part to lenders' concerted efforts to streamline the process of deciding on offers for the homes they control. In many cases, approvals have been received in 60 to 90 days, as opposed to the several months it had taken in many cases previously. The long wait often discouraged potential buyers and caused them to walk away from deals.

However the trend at the foreclosure auction sales was quite opposite. There were 26.4 percent less properties sold either to the lender or investors compared to the first quarter of 2011.

Here are county-by-county figures showing the number of distressed property sales as a percent of all sales during the three-month period:

Chicago land figures reflected similar trends in national sales of distressed properties. The nation's 265,087 in sales of these properties during the second quarter corresponded to 31 percent of all sales, up from 24 percent a year earlier.

Deepest Discounts On Sales In City Of Chicago

Discounts on purchasing distressed properties were most pronounced within the city of Chicago, with 47 percent of the 2,095 in total sales being either homes in foreclosure or lender-approved short sales by homeowners. While conventional sales of detached homes averaged $358,590, short sales averaged $139,395 — a 61 percent discount — and bank owned foreclosures* $90,686 — a nearly 75 percent discount.

Sales of distressed condominiums and townhomes in Chicago, which represented 33 percent of the 3,055 total sales, also included deep discounts. Conventional sales averaged $378,858, but short-sale prices averaged 56 percent less at $166,160 and bank owned foreclosures* were selling at 75 percent discounts for an average of $90,686.

The trend in increased bank owned foreclosures since the beginning of the year is expected to continue at least into the third quarter because of the large number of properties remaining in inventory. National figures for July already show distressed property sales representing about 30 percent of all sales.

The number of distressed properties is expected to increase even more when lenders nationwide begin processing an estimated 1.7 million foreclosures that lenders have delayed because of investigations by federal and state investigators looking into suspected improper procedures or by the general logjams in court systems. Another sign of the potential for stepped up foreclosure activity was an increase in mortgage delinquencies reported during the second quarter of 2011. A survey of lenders found the increase was modest, but it signaled a reversal of the downward trend that occurred during most of 2010. A delinquency is defined as a mortgage that is one or more payments in arrears.

bank owned foreclosures* - Usually known as REOs. These are properties which went through a foreclosure auction and were bought back from the bank.