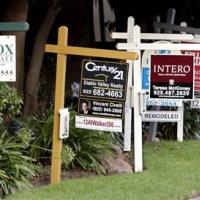 Home prices are expected to drop another 3.6 percent by June 2012, bringing the nationwide average to a new low of 35 percent under the peak levels achieved in early 2006, according to a new report released last week.

The report, released by financial analytics company Fiserv, cites increased foreclosure activity and continued high unemployment as key factors in the pricing decrease. The June decrease would mark the third low point — or trough — since the housing bubble burst in 2007-2008. The first trough was at 31 percent below peak levels in 2009. The second was last winter, when prices fell 33 percent.

That was followed by a short-lived period of rebounding prices. That rally was considered artificially induced by a slowdown in foreclosure processing, largely the result of the "robo-signing" controversy in which loan servicers were accused of improperly processing foreclosure paperwork. Foreclosure activity has since picked up and more housing is returning to the market.

Additionally, another 6 million homes are currently in what has been called "shadow inventory" — properties that lenders or distressed homeowners have delayed putting up for sale because of the depressed market. These properties could be released to the market at any time to put even greater pressure on home prices.

Fiserv predicts the market will begin a modest comeback after the June 2012 trough, but prices are expected to increase only about 2.4 percent over the following year.

Nearly Half Of Mortgages In Chicago Area Underwater

Slight more than 46 percent of single-family home mortgages in the Chicago area were underwater, meaning the amount due on the loan was less than the equity in the property. That was considerably worse than the national average of 28.6 percent, according to a report released this week. The number of Chicago homes underwater rose 9 percent from the second quarter of this year.

The report also showed that the number of homes selling for a loss in the Chicago area reached 43.4 percent, compared with a national average of 34.4 percent.

Credit monitoring agency Transunion reported this week that the mortgage delinquency rate in Illinois increased to 6.57 percent from 6.28 percent, indicating further increases in foreclosure activity may be coming. Transunion defines delinquencies as mortgages that are at least two payments behind schedule.

Transunion had previously forecast the rate to decrease, but attributed the unexpected increase to a broad range of economic factors. Deteriorating housing prices and unemployment rates are normally key causes of increased delinquencies, but those were not a significant factor during the most recent period, Instead, Transunion reported, decreased consumer confidence brought on by the U.S. debt downgrade, U.S. and European debt crises and a plummeting stock market may have been the cause.

The bleak economic outlook as well as the increasing number of mortgages that were underwater may have spurred consumers to forego mortgage payments, Transunion said.