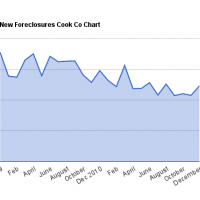 As expected, in the Great Chicagoland Area the foreclosure auction activity soared at the end of the calendar year. On the other hand, due to the holidays season the new filings in most counties were less compared to the numbers in November 2011.

The number of properties sold at foreclosure auctions in December have increased by 13.14%, a total of 3,048, compared to November of 2011 and by 81.00% compared to December 2010. As noted by ILFLS one of the reason of this decline was due to the delayed paperwork from the banks and legal issues with some of the lenders.

The biggest drop in new filings in December was in Kendall County, 18.42% decline, followed by Will County with 14.42% decline.

"We expect there to be a similar trend in 2012 with possible increase of 5-10% in the number of new filings. This is partly due to the fact that most of the cases dismissed in 2010 and 2011 due to robo-signing errors are being refiled again." - a spokesperson for ILFLS said.