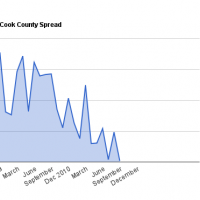 New foreclosures filed in the Chicago area during September fell 34.8 percent compared with a year ago and dipped 15.1 percent compared with August 2011, according to new figures released by the Illinois Foreclosure Listing Service (ILFLS). But at the same time, the number of foreclosures completed — either through sale at auction or reverting back to lenders after they did not sell (Real Estate Owned, or REO) — decreased more than 50 percent across the seven counties tracked by ILFLS.

Perhaps most troublesome to the Chicago-area housing market in general is the fact that actual sales of foreclosed properties represent only a very small percentage of the total completed foreclosures. With well over 90 percent of those properties reverting to lenders, the surplus in housing inventory continues to grow dramatically. That is certain to continue exerting downward pressure on residential prices and sales.

During September 2011, a total of 5,212 new foreclosures were filed, compared with 7,989 a year ago and 6,139 the previous month. It appears we are still experiencing a slowdown in new foreclosure activity, largely the result of concerns over 'robo-signing' accusations that lenders fast-tracked foreclosure and mortgage paperwork without proper reviewing it.

The number of properties sold through auction was little changed from a year ago or the previous month, and still accounted for only a small percentage of total completions.
Completed foreclosures, the totals reverting to REO and sold at auction, decreased 53.7 percent compared with a year ago, to 1,762 from 3,803. It increased slightly compared with the 1,670 in August.