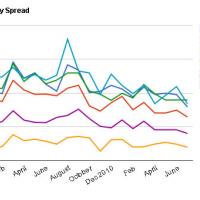 Residential foreclosure activity in the Chicago area fell sharply during July compared with the previous month, and the decline was even more pronounced when compared with a year ago. New foreclosures filed in the seven-county area dropped to 4,696 in July, down 18.59 percent from 5,768 reported in June and 37.49 percent from 7,512 in July 2010. The Chicagoland area includes Cook, DuPage, Lake, McHenry, Kane, Will and Kendall counties.

The figures represent a continuation of the general downward trend since the beginning of the year.

Here's how the other Chicagoland counties fared in new foreclosure filings, with July-June 2011 comparisons followed by year-over-year comparisons:

While the number of new foreclosures fell in July compared with June, new REO (real estate owned) properties — homes that did not sell and reverted to bank ownership — showed an overall 9.31 percent increase, to 1,444 in July from 1,321 in June. Cook County led the way with a 17.21 percent increase to 944 from 806.

REOs in many cases present excellent investment opportunities because banks are eager to clear these non-performing assets from their balance sheets. Even though banks frequently spend substantial amounts to repair and/or remodel these properties, they are still available at attractive discounts to market value. Other REOs that have been neglected are also good candidates for investment by buyers willing to do their own rehab work.

Here are figures for new REO properties, by counties other than Cook, for July compared with June, followed by the percentage change:

Although new REO properties showed an increase, the number of homes sold to investors remained at about the same level as in June. In fact, the number of investor sales has continued at about the same pace all year, with the units sold in the seven-county area ranging from about 100 to 120 each month. A total of 118 units were sold to investors in July, a modest 4.42 increase over the 113 sold in June.