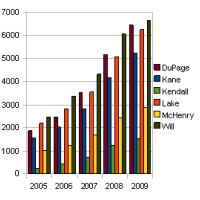 2009 was not the best year for the Chicago land area real estate market. The most affluent county in Illinois, Du Page County(24.84%), has taken 2nd place after Kane County(26.23%) as a percent increase in new foreclosure filings compared to 2008. Cook County rate of foreclosures has dropped to 8.35% and is the lowest in Chicago land due to the fact that the capacity to file new cases is almost reached. Kendall County which was the top producer for 2008 with the astonishing 73.09% has taken 4th place.

Even though on April 5th, 2009, State of Illinois issued the Homeowner Protection Act of Senate Bill 2513, it did not bring any change in the total foreclosure picture in Chicago. The impact of the Bill 2513 was a temporary slowdown of the new filings, which brought only confusion and frustration in the local county courthouses. By the end of 2009 the speed of new filings has passed over all previous expectations. It hit almost 30% - 60% percent increase compared to 2008.

The most ridiculous part of the whole foreclosure process is that some banks require much higher bidding amounts at the auctions and later, sometimes 6-8 months, try to list their inventory of REO's for 50% below the sold back to them at the auction price.

What can we learn from this?

There will be a stable increase in the foreclosure filings in 2010 with an average of 10-15%. More and more properties with mortgages above 500K will be foreclosed if the economy keeps shrinking.

Advice for the real estate investors:

Now is the time to buy foreclosed properties and discounted real estate.The banks are completely irrational when it comes to real estate values and equity.