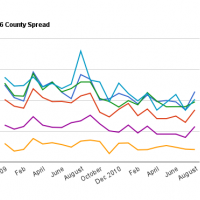 During August a total of 6,139 default notices were issued in the Chicagoland area, a 19.3 percent increase over the 5,144 reported in July. Cook County had the greatest number, 3,776, up 16.4 percent from 3,243. Among the seven counties in the Chicago area, only Kendall County reported a decrease, to 99 from 102.

County-by-county totals for the Chicago area were:

The increases may be the result of lenders — who had slowed down the foreclosure process in the wake of state and federal investigations into mortgage practices — resuming the pace of their filings. The increase is expected to place further strain on the housing market and home prices.

A new Chicago ordinance that requires lenders to take over and maintain vacant property — even before it has been foreclosed — may be facing legal challenges.

The ordinance, which the City Council passed in late July, redefines mortgagee to include the lender as an owner of the property. Under the new ordinance, lenders would be liable for maintenance of vacant property, both residential and commercial. The law is effective September 18.

Lenders maintain that is contrary to property law, which specifies that title to the property is required in order to have access to it. They maintain the Chicago ordinance bypasses to judicial process, foreclosure, for converting the lien on a mortgaged property to ownership. Further, they note that foreclosure is an option and lenders could maintain their lien on property without ever taking ownership.

Illinois homeowners who have lost their jobs or whose income has fallen by at least 25 percent may be eligible for up to $25,000 each in mortgage relief that could make their payments for as long as 18 months. Although the funds are called a loan, repayment can be waived if a homeowner follows the guidelines.

The state, along with 17 others and the District of Columbia, received funding under the federal "hardest hit" program. Recipients were selected if their statewide unemployment rates were higher than the national average or home values declined more than 20 percent. Illinois qualified on both counts.

Residents can qualify for the program if they owe no more than $500,000 on their mortgage, have a fixed- or adjustable-rate loan and whose total household income is no more than 120 percent of the area's median. The program also applies to homeowners in foreclosure, although lenders can reject that in cases where the process is nearly complete.

The largest mortgage servicers have confirmed their participation in the program.

The program requires residents to make monthly payments of 31 percent of their gross income to the Illinois Housing Development Authority, although that could be reduced or waived for those in the worst circumstances. The agency will make full mortgage payments directly to the lenders. The agency will continue payments for up to 18 months or until the $25,000 limit is reached.

Homeowners who miss two monthly payments to the agency may be terminated from the program. Homeowners who sell their homes within five years do not have to repay the loan unless they make a profit on the sale. During the next five years a portion of the loan is forgiven monthly.

National statistics are based on publications by Realtytrac.com in the media. All other stats are based on ILFLS proprietary data and it requires reference to ILFLS.com as a source if used elsewhere.